Wole Lagunju’s Masks: In the heart of Yoruba.

Wole Lagunju is a contemporary visual artist from Lagos, Nigeria. His art focuses on distinguishing Yoruba culture and traditional art in contemporary art world. Yoruba is an ethnic group of people from Western Africa inhabiting Nigeria, Benin, Togo and parts of Ghana. Yoruba culture has a deep connection with spirituality and Lagunju explores different aspects of Yoruba culture and art while examining and illustrating factors that have shaped the history of Africa. His art constantly reinterprets and redefines traditional Yoruba culture by indulging in theory making, hybridization of cultures, juxtaposing or conflating ideas from different or similar eras in world history.

Tribal art has a tendency of getting lost in times of modernization but Lagunju centralizes his work around Yoruba tribal art and reproduces it as contemporary art for a global audience. Yoruba tribe is known for its art of making sculpted masks which are known to have various functions, be it personal, communal, serious or satirical. These artistic masks are used in combination with ritual dance to entertain, educate and inspire worship. He explores spirituality through these masks by morphing the physical and the spiritual values of Yoruba culture. He explains that there is a distinction between ‘oriinu’ which is the spiritual head and ‘oriita’ that is the physical head of an individual. The Ori (head) acts as the spiritual head which defines the metaphysical nature of a Yoruba individual in both the physical and spiritual realms. The concept of Yoruba spirituality focuses on self exploration, learning one’s destiny, interacting with the spirits of nature and connecting with the gods. 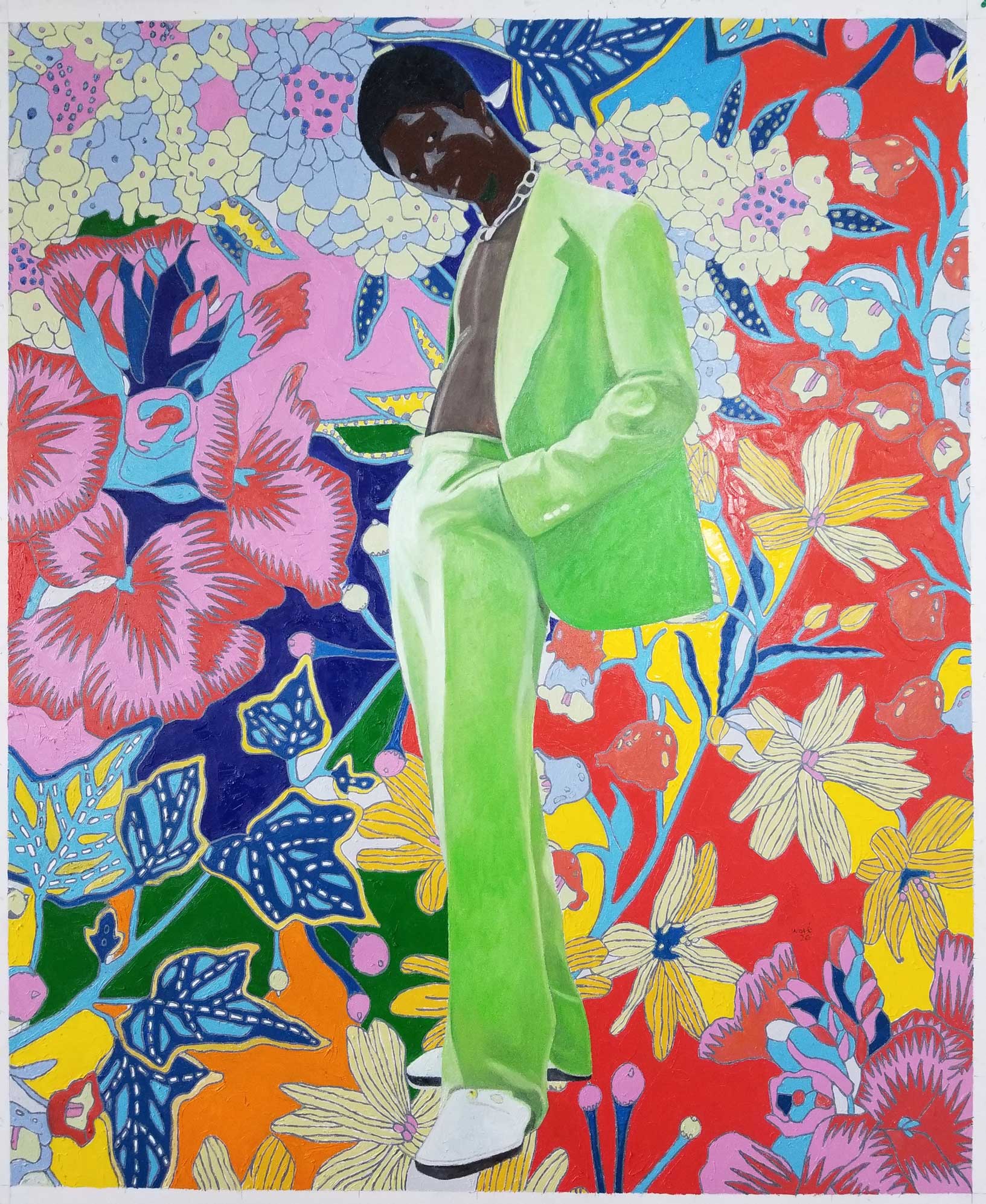 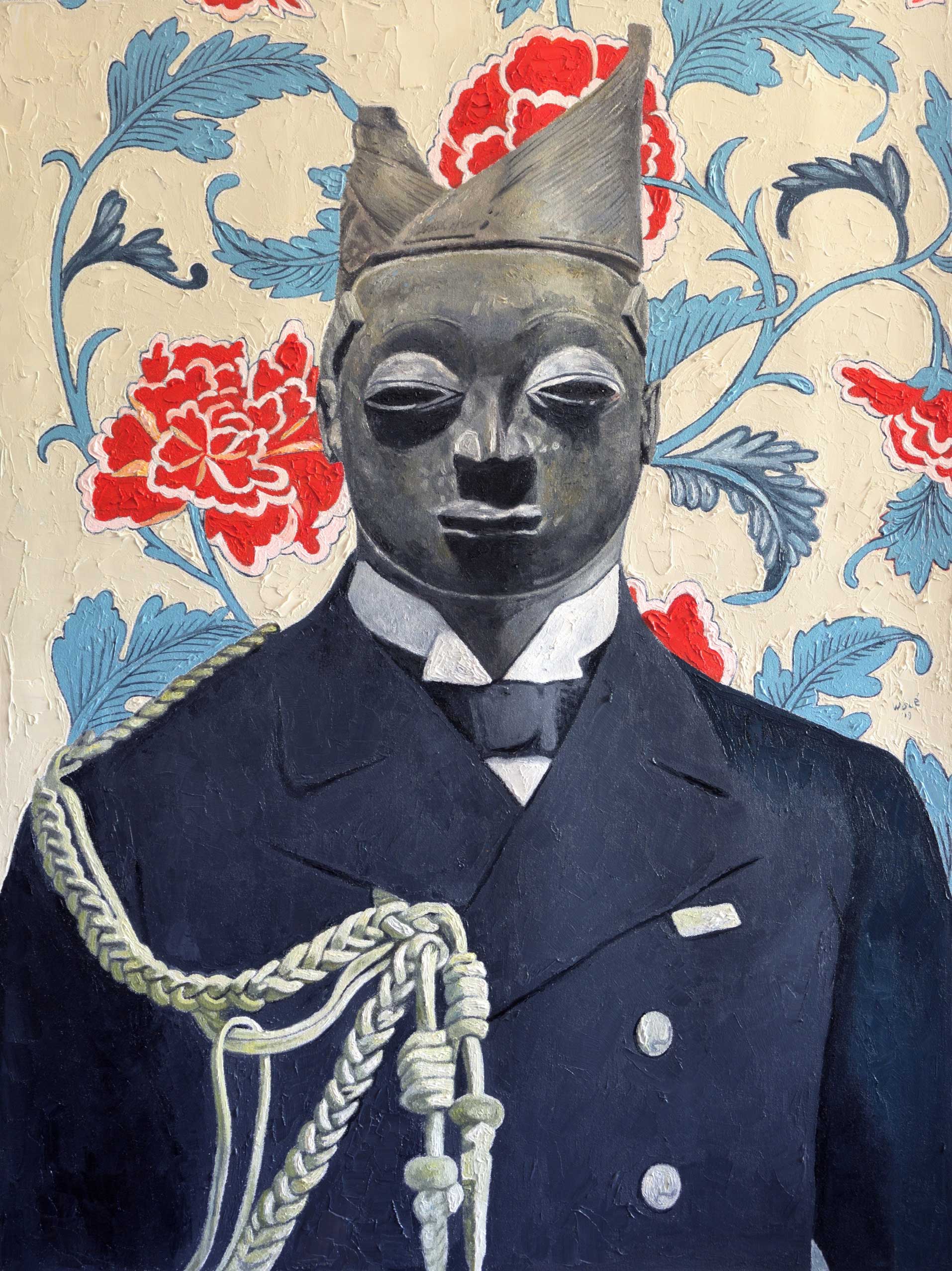 One of his prominent works called ‘The Gelede Project’ interrogates and challenges the imperialistic cultural idioms and the stereotyping of traditional African Art. Gelede is a masquerade that celebrates women of Yoruba society, their female ancestors, deities, elderly women of the community, and their spiritual radiance. However, Lagunju reinterprets the Gelede masks and used them to “return the gaze, whatever and wherever it emanates from with the traditional Yoruba Gelede masks and their satirical undertones”. Gelede and other portraits depict African and Western subjects dressed in “elaborate sartorial ensembles” through which he celebrates “cannons of Africanity”. His art demands open mindedness and imagination that can accommodate the inspiration behind his work and educate the viewer regarding the same. He understands that it is imperative to forge new spaces of consciousness and consistently engages with the shift and turns of cultural, personal and political sensibilities. He combines the traditional and contemporary fashion elements in his paintings to create an unsettling air that can develop a space for self reflection and introspection around the African past and present. The bold colours used in the paintings are a reference to ‘adire’ which is the indigo dyed fabric of traditional Yoruba women and the popping colours make references to contemporary fashion.

In his recent works he has used fashion as an important aspect to reinterpret the iconic references by appropriating the fashionable textiles, images iconic photos from the 50s and 60s Euro-American fashion scenes. He uses images from contemporary fashion to “reframe images of the female and black male” and as he keeps the spirits of Yoruba alive in his art he also addresses the “misconceptions found in pre and postcolonial African history”. His art challenges the stereotypes around ‘Africanity’ as he summons the spirits of Yoruba to dance and pose on his canvas for the world to accept and admire. 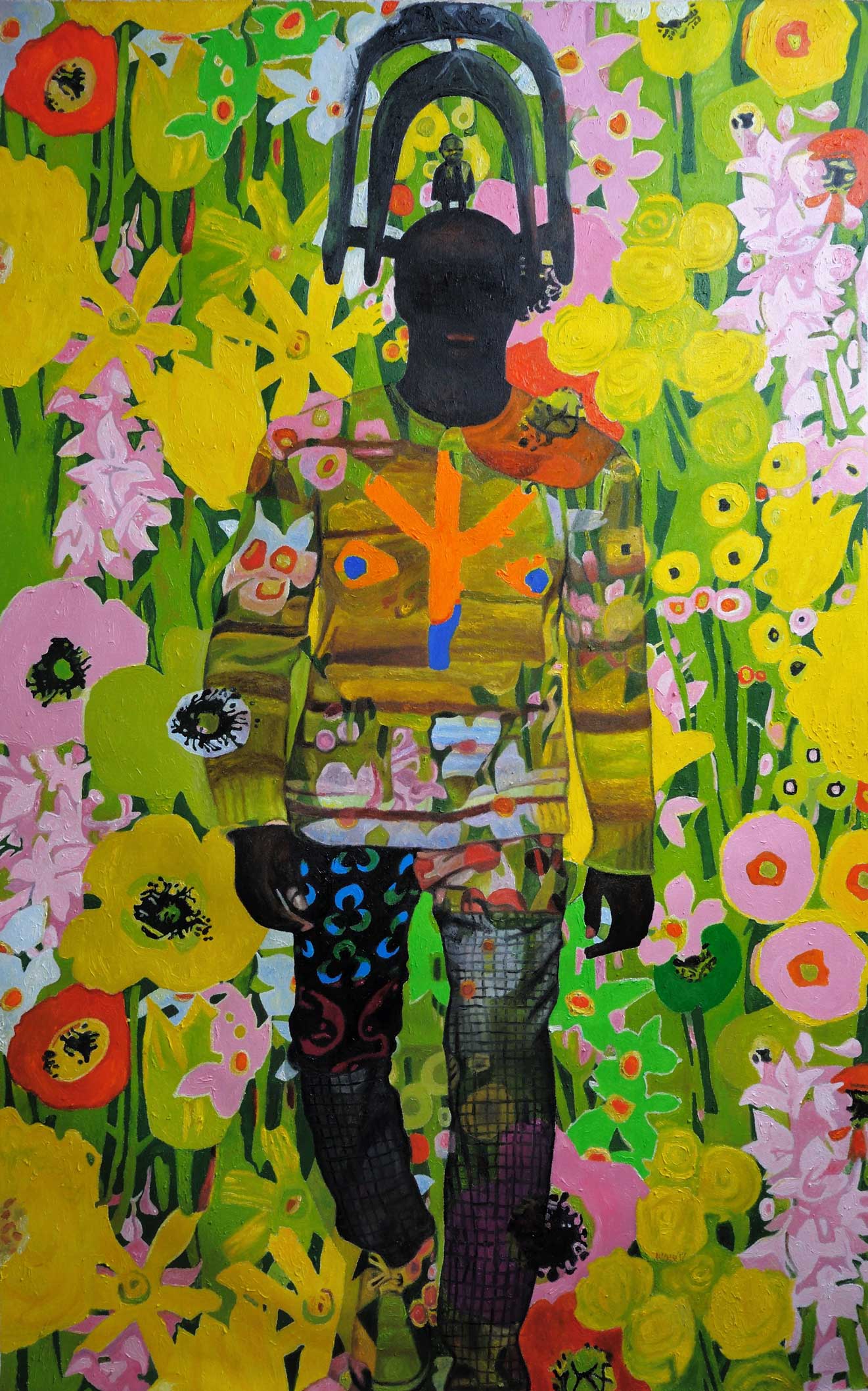 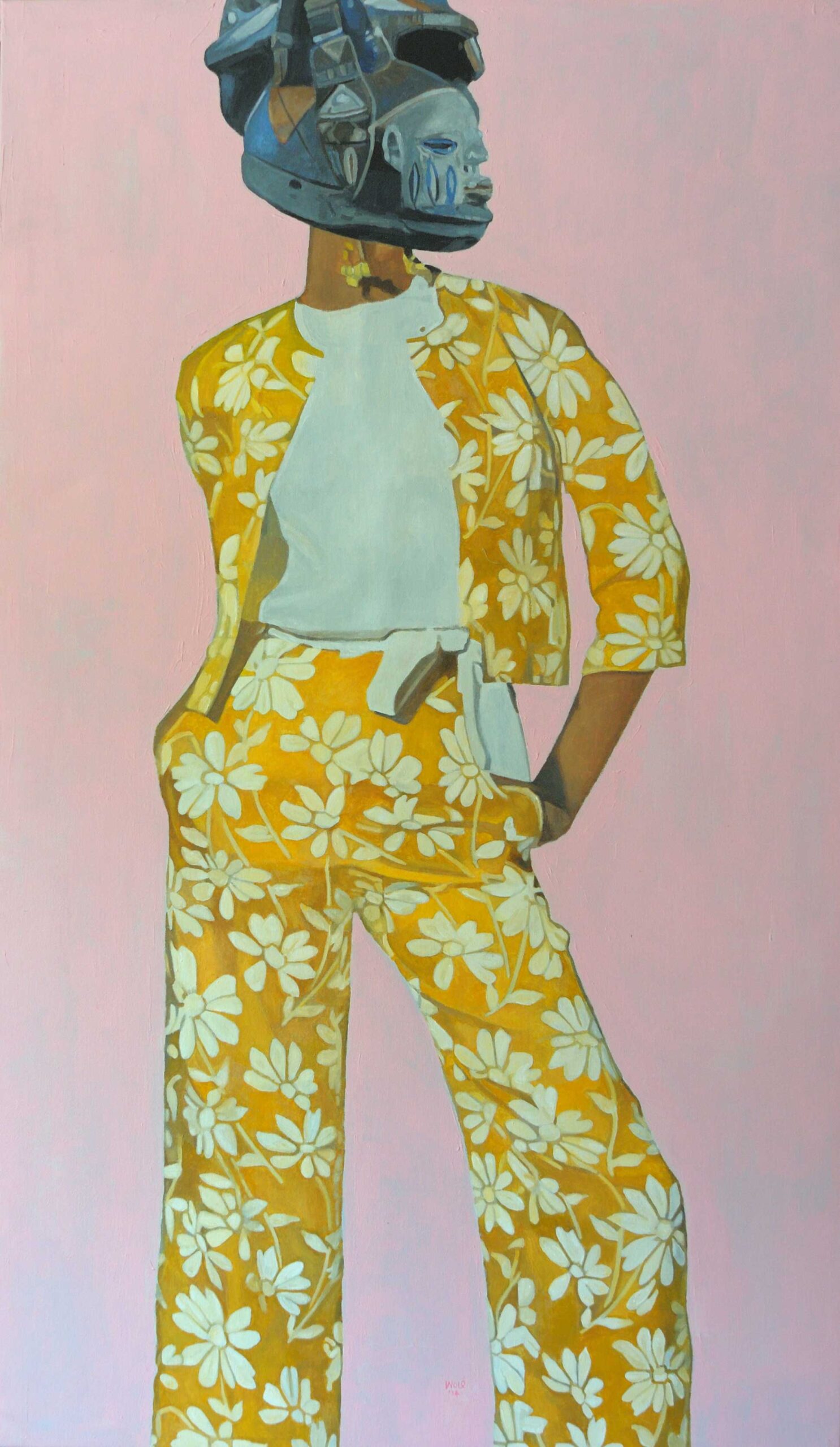 All Artworks by Wole Lagunju. 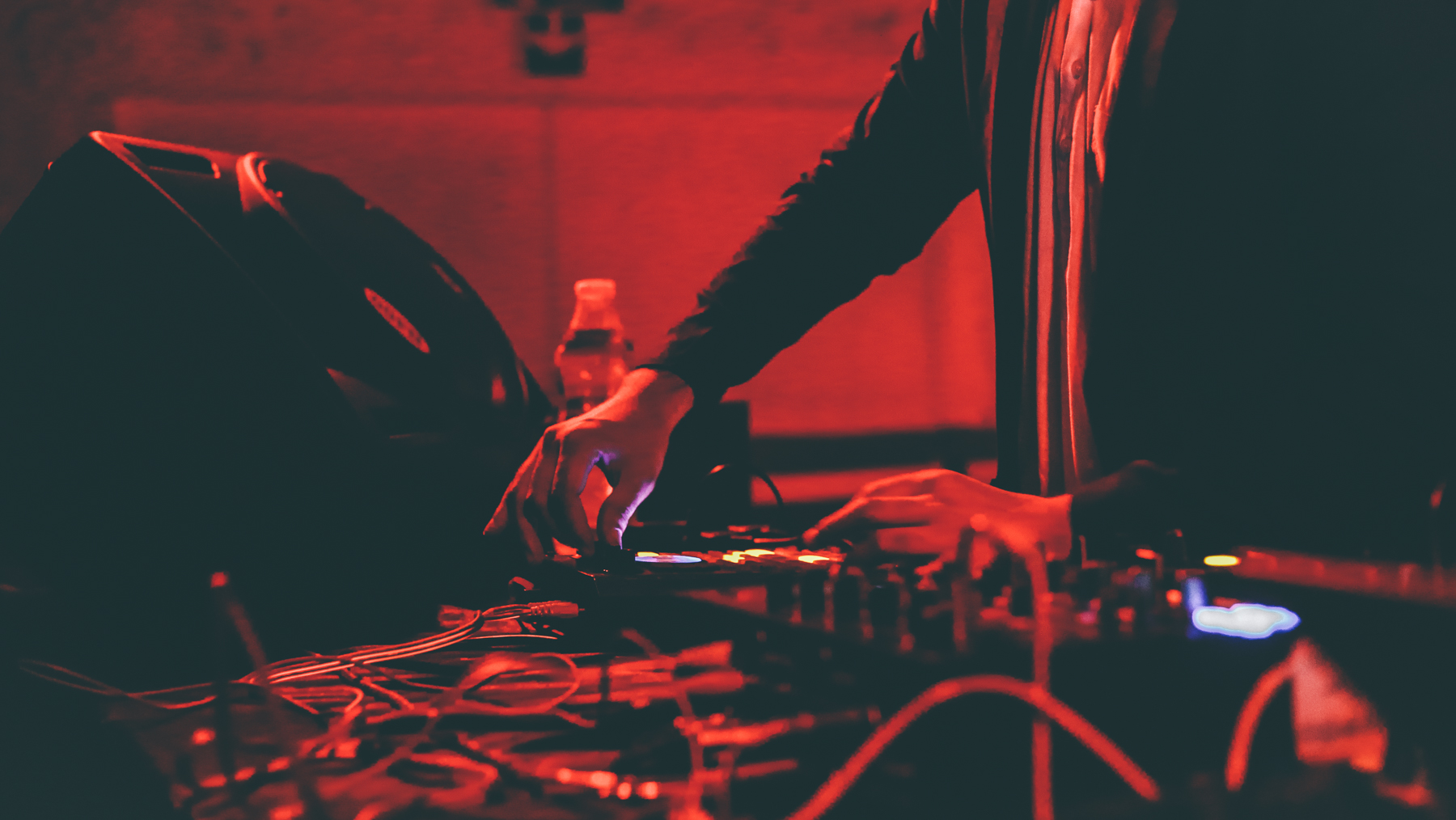