Every month we try and reach out to artists from various social backgrounds, pursuing unique projects. This month we got an opportunity to invite very young and phenomenal photographer Priyanka Shah, as one of our guest Curator.

Read below her journey as a photographer around Ethiopia, Africa. 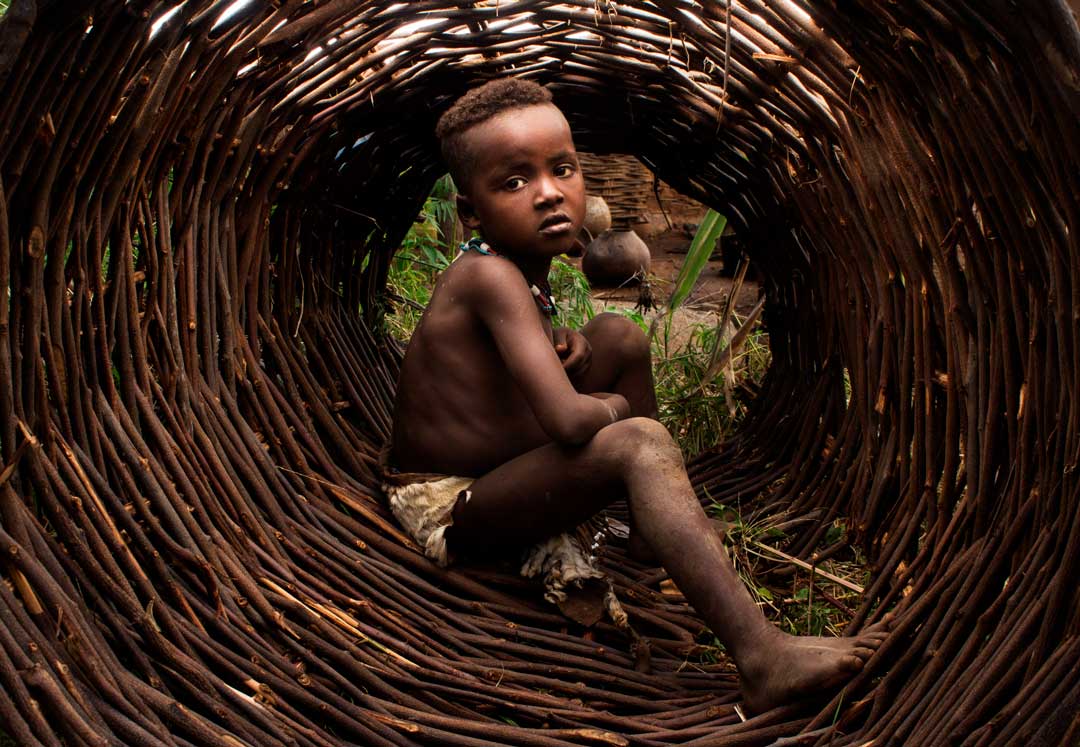 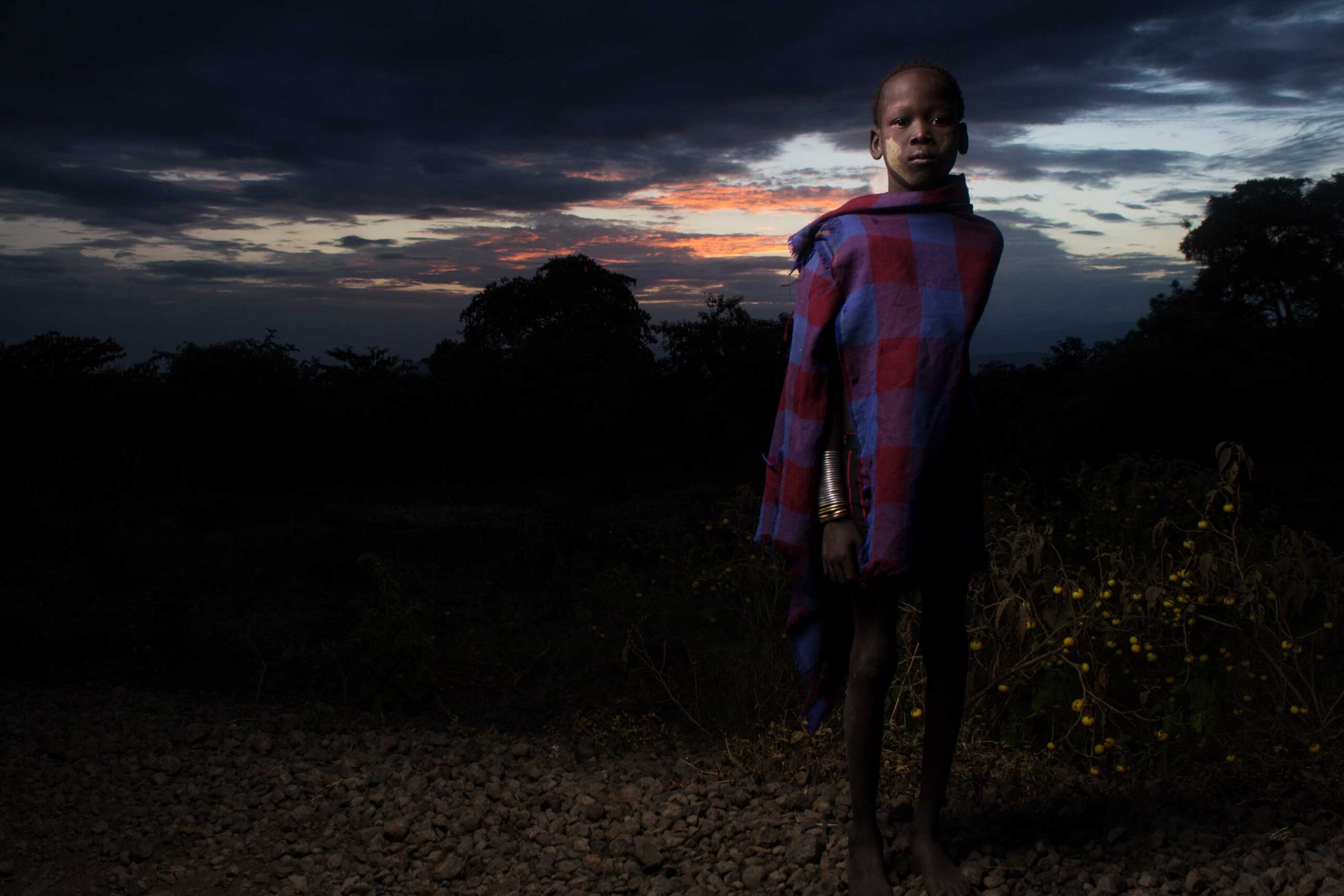 When you hear about places in Africa, all of us have a preconceived notion about how unhappy people are, how they’re always famished, how the kids have to work all day and how it’s always so hot. This trip changed my perspective completely. I have never met people as happy or content with their lifestyle as these guys. They’re faces beamed with smiles, each one of them was so enthusiastic about learning and some of them even picked up concepts so quickly it was absolutely amazing! Every soul was so warm and caring and the emotion they shared for the tribe they belonged to was unreal! As a photography student, I felt like it was my duty to capture these beautiful people, their stance, their poise which was like something I have never seen before.
I felt privileged to have this opportunity at the mere age of 18,  and be a part of all the experiences there.
Through a period of 10 days we went past the Omo valley and visited the Ari, Mursi, Dassanech, Hamer & Benna tribes. The thing that remained constant was how all of them were so welcoming, how each of them took equal amount of effort to understand us, our language and the pride and respect they had for their tribe, their people. 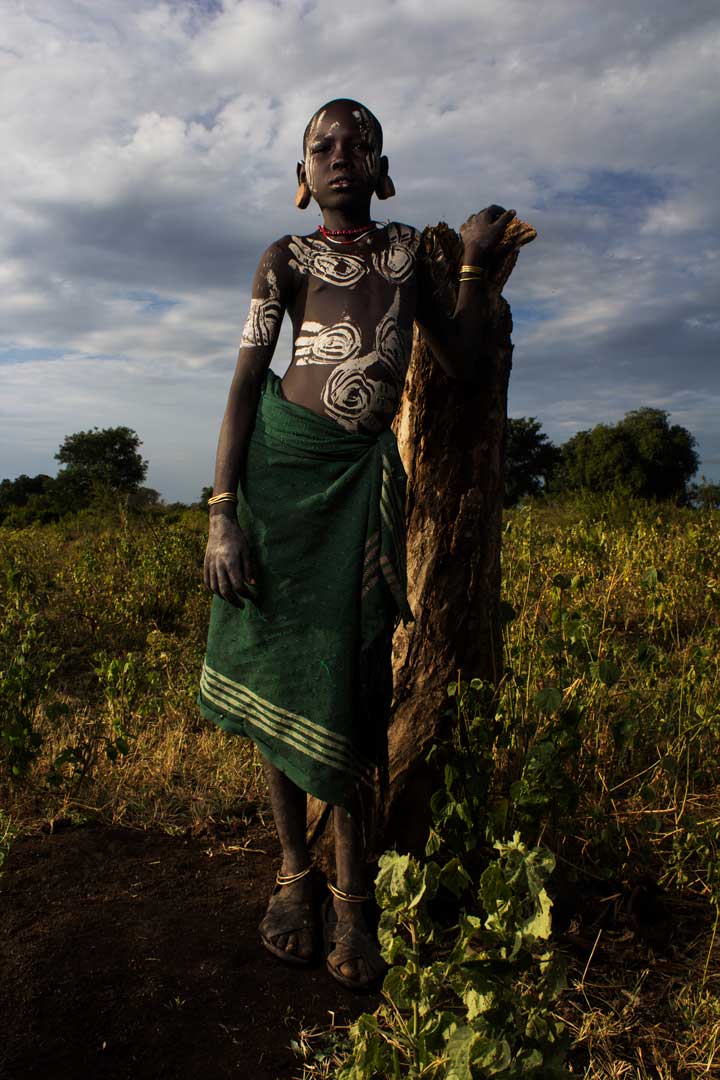 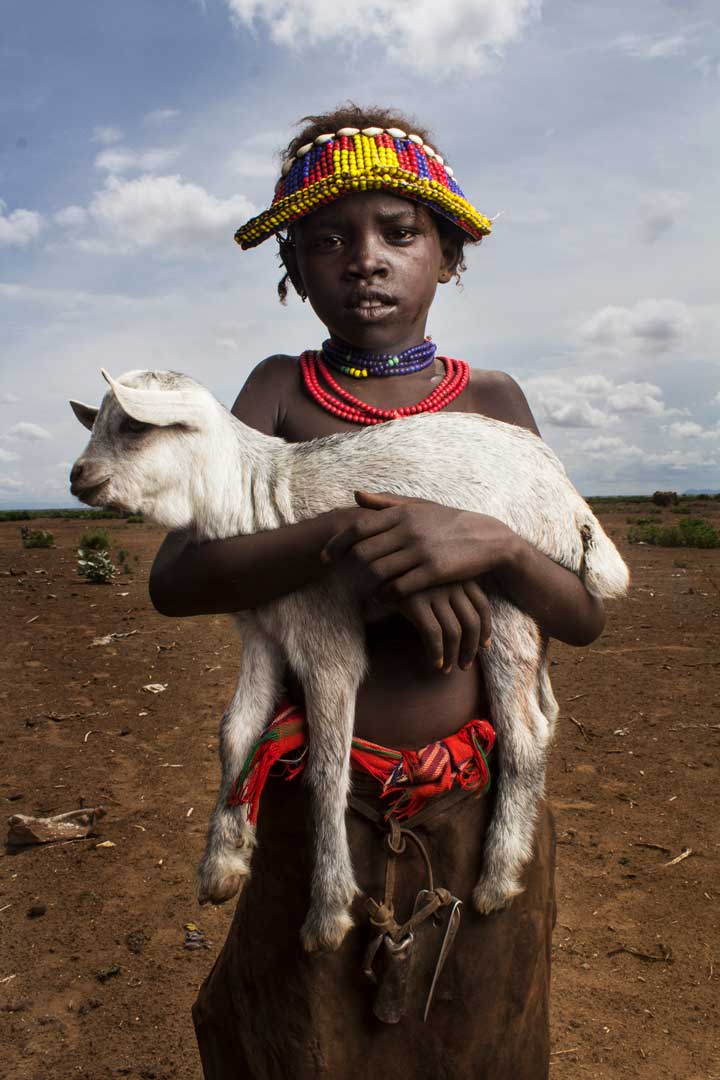 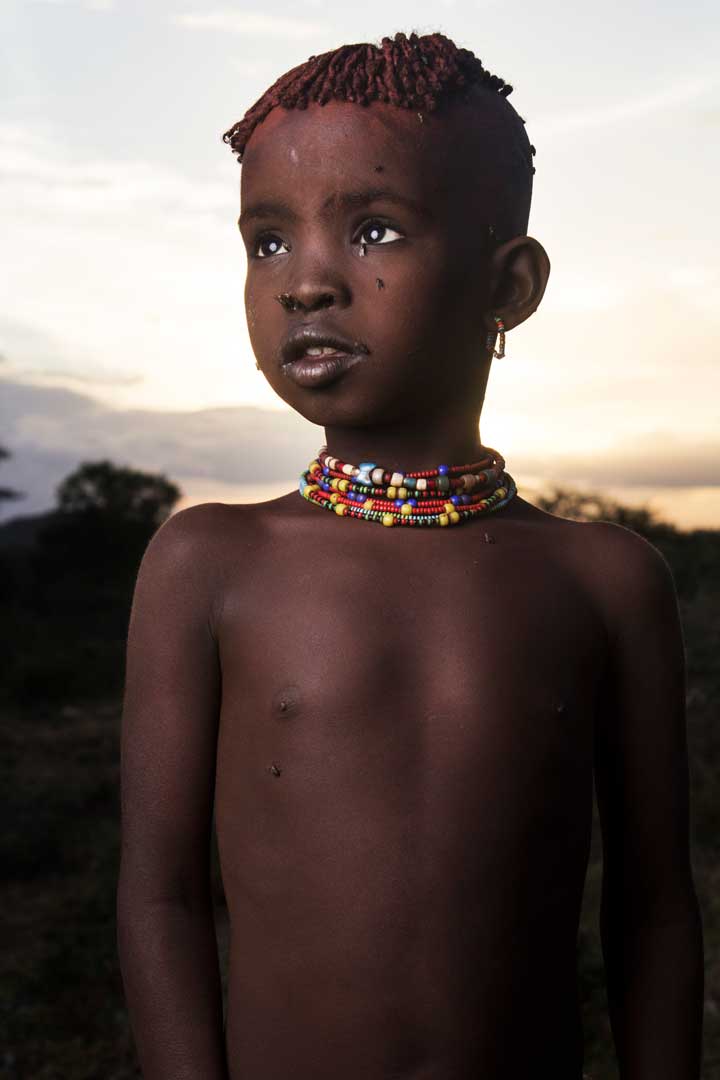 The Ari, being the first tribe we visited was a challenge, to our surprise we were the first tourist they had ever met, being complete outsiders bridging the gap took a while. The Ari, dressed in jerseys, tshirts, skirts and pants & were quiet and extremely shy until the next day. They even had a bollywood poster in one of their houses! While we left a little girl ran upto me for a parting handshake, one last time, it was a special moment.
The Mursi on the contrary were proud, tall and confident people, their body language was like one I hadn’t come across, they were almost intimidating. Bare bodied they were either covered with painted handprints or they draped pieces of cloth mainly striped or made handmade skirts and jewellery made out of animal skin. They wore alot of beads & lemons on their head and hung bottles around their faces, wrapped in animal skin and filled with local alchohol . They were rather extremely friendly and used to having many tourists. There was a special moment where we sat with them and they taught us their language and we taught them ours.
The Dassanech were based near a river, they had the hottest climate. Their houses were poles apart from the others, while the others used logs of wood they used foil and metal sheets to make their houses. They strutted in their creative headgears made out of bottle caps, most of them had hats and all the little girls held goats and sheep with a lot of affection. In terms of emotion this tribe hit the peak, a little boy walked with me, holding my hand throughout the time I spent there. 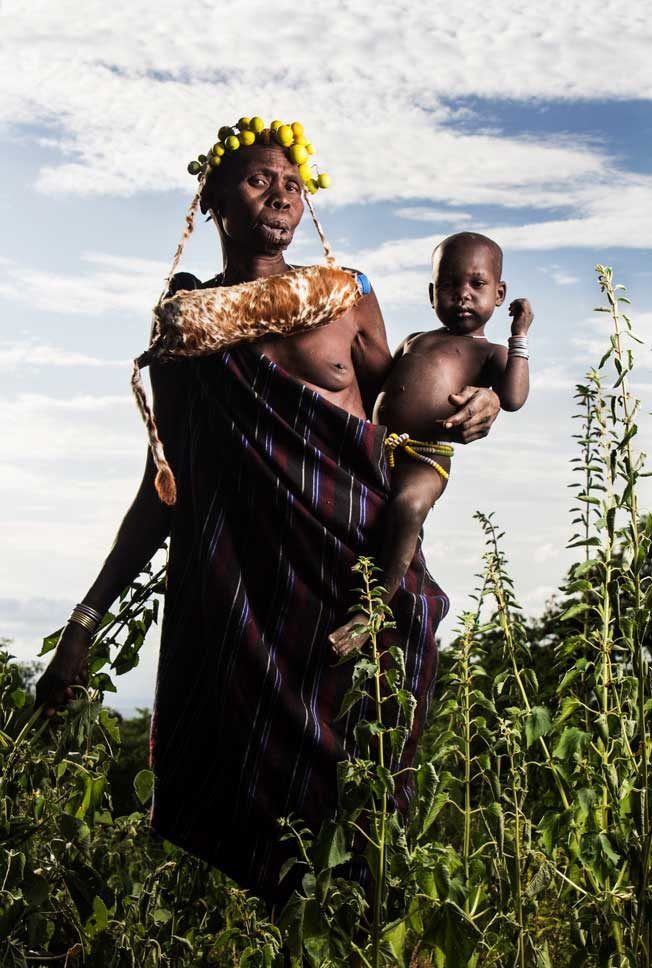 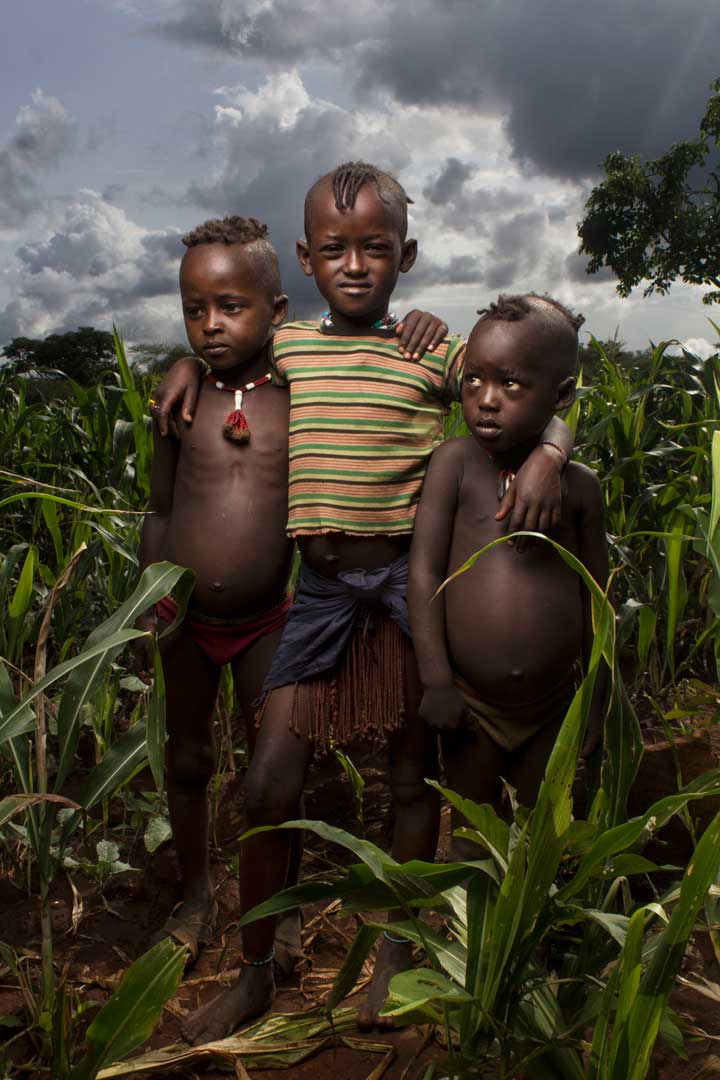 The Hamer were the most welcoming, and made us feel at home,the vibes were so positive and communicating with them was the easiest. They were patient and passionate.They too wore patterned cloths, they wrapped around their bare bodies like shawls, most of them were checkered. They wore handmade bracelets, necklaces. There was a certain level of skill and art behind these jewellery pieces, they were Intricate and beautiful and complimented their skin beautifully. They prominently used the colours of the Ethiopian flag and had a predominant mushroom hairstyle. We had a night full of laughter, they had the best sense of humour and the most contagious laughs!
The last tribe, Benna we spent two nights with. The bond was much stronger, they accepted us like a part of them and also asked us to stay back. Their grasping skills were impeccable, we taught them how to play football and the game went on for hours. They put in tremendous efforts in showing us around, and their practices. The way the scared birds away with a stone and a rope required alot of strength. This was the only tribe that wore tick tack clips, hats,they were extremely stylish. 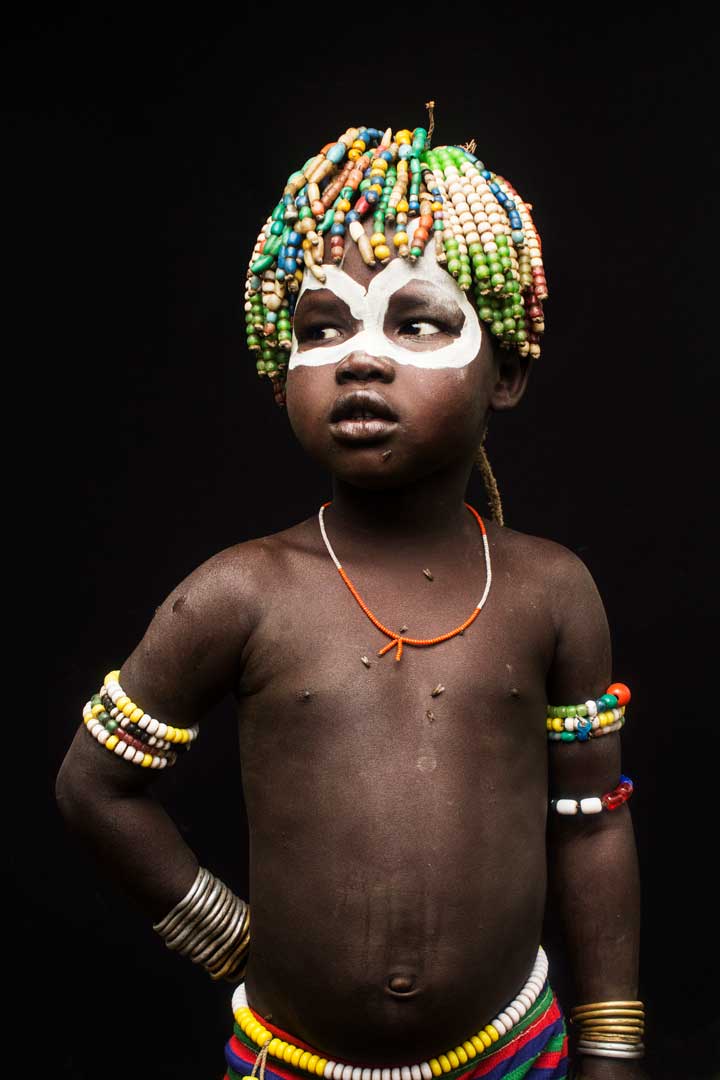 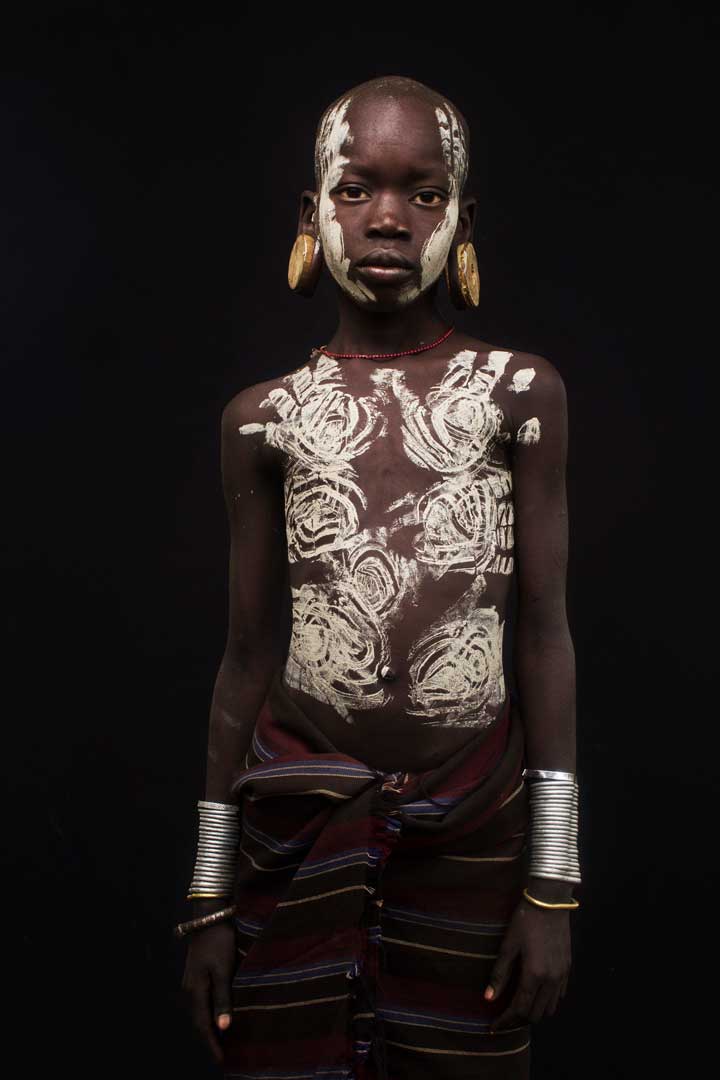 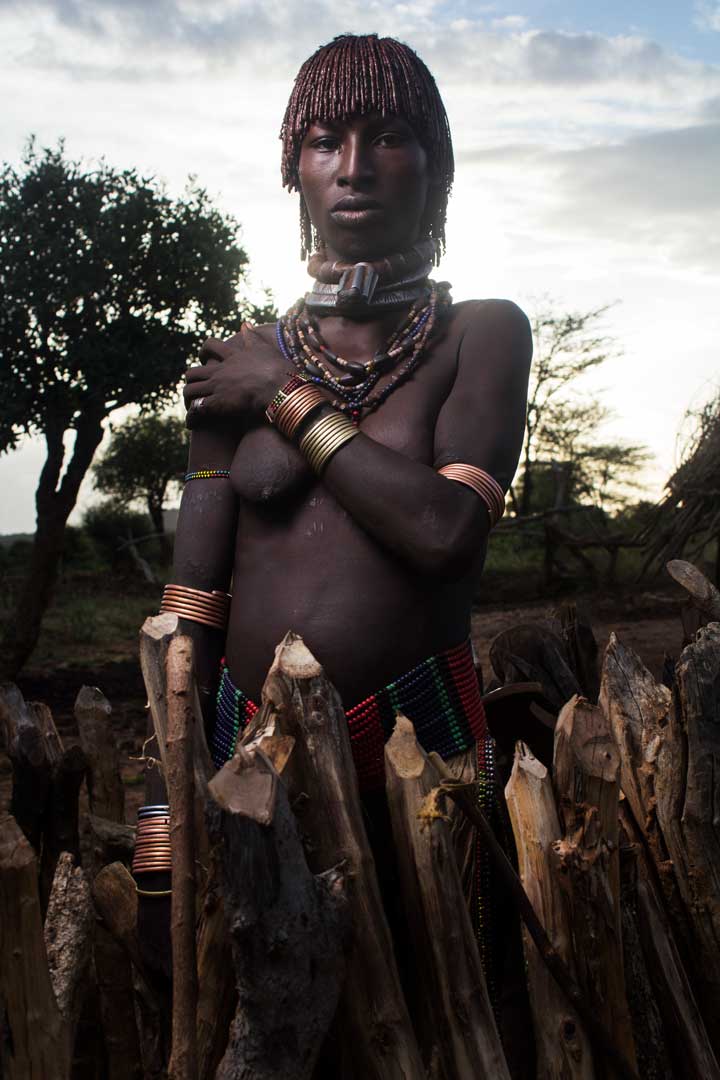 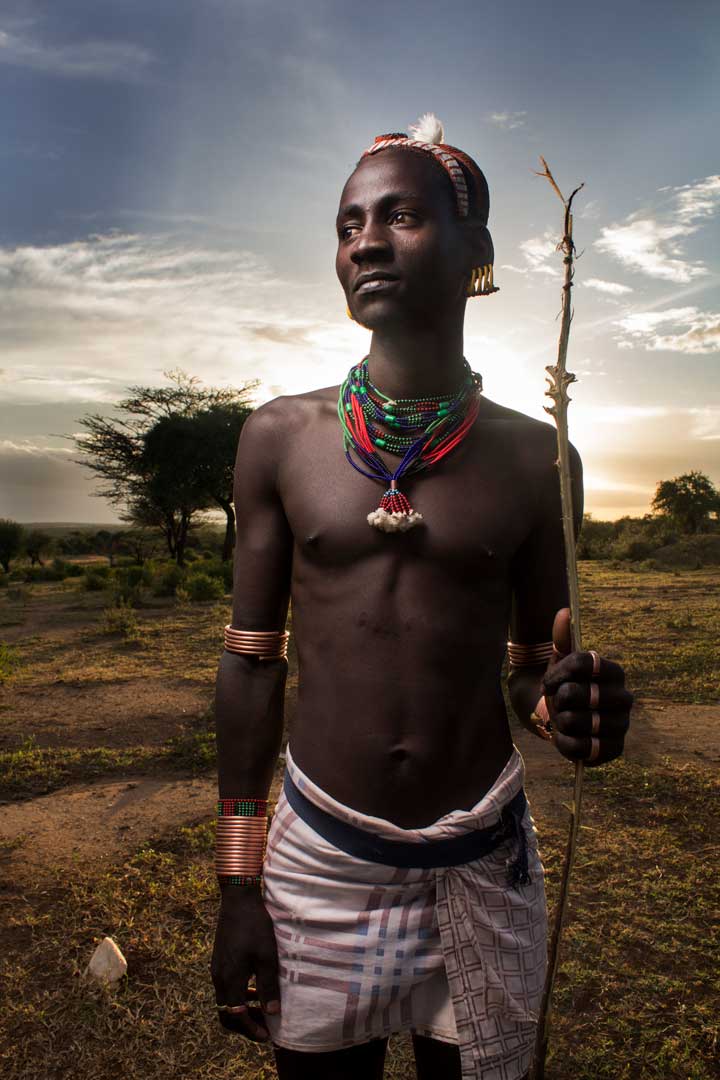 I mainly focused on capturing the children of the tribe, because being children they all were so similar, but the way they stuck to their values and authenticity of their tribe, created a drastic difference. They had a spark in their eyes throughout and the one thing that kept me going was their enthusiasm. Their bodies created such rhythmic lines and postures, it was a pleasure to shoot them. Children according to me also were the most expressive, which was another reason I chose them to be my subjects. What was special about them was, they came, they were themselves and they left, they didn’t even try to pose, that’s what makes the images so unique. Also they are the upcoming generation, they are the ones who are going to carry along these norms, traditions and culture and I thought it was important to capture that and bring it to attention.

Text and Images by Priyanka Shah. 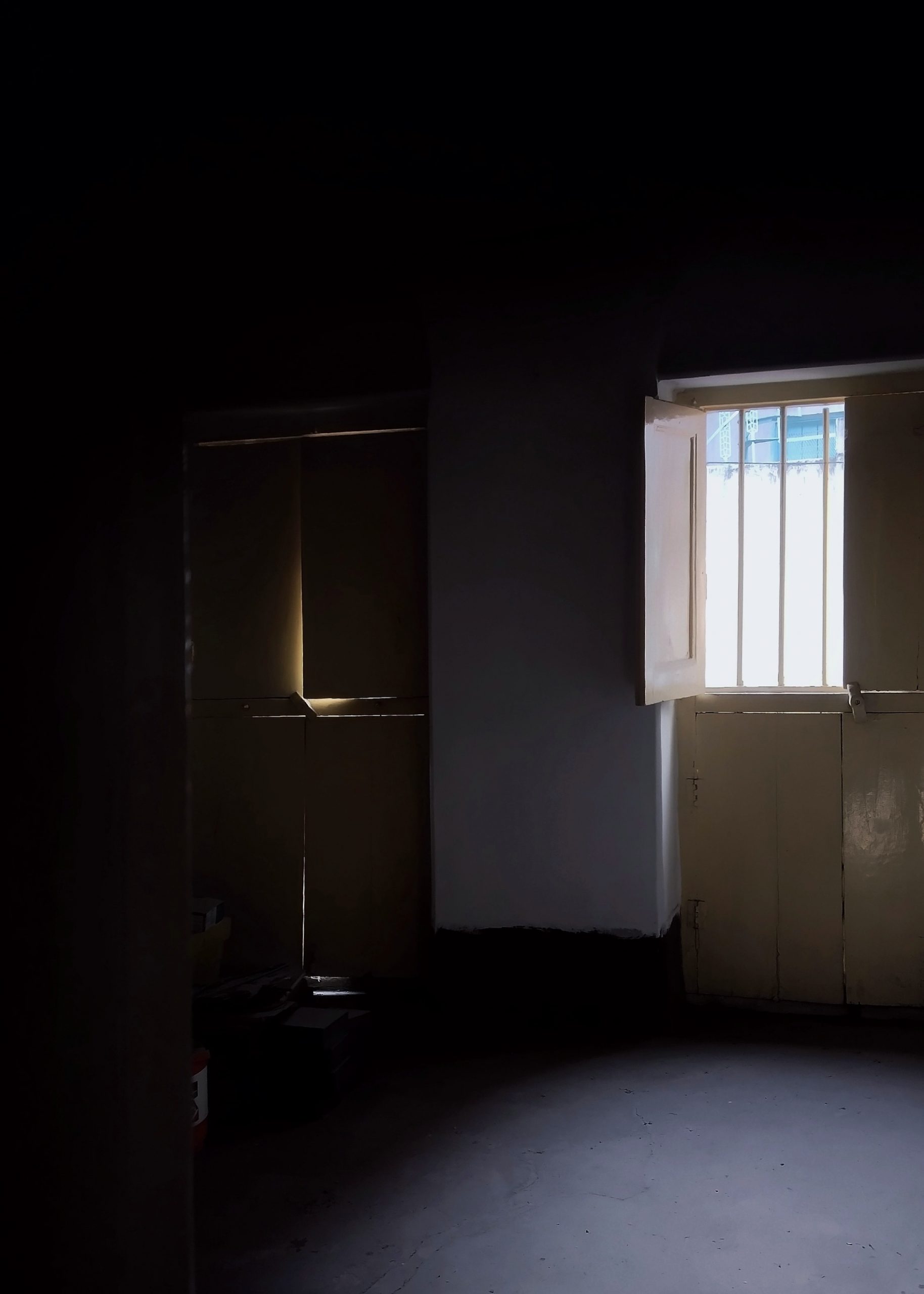 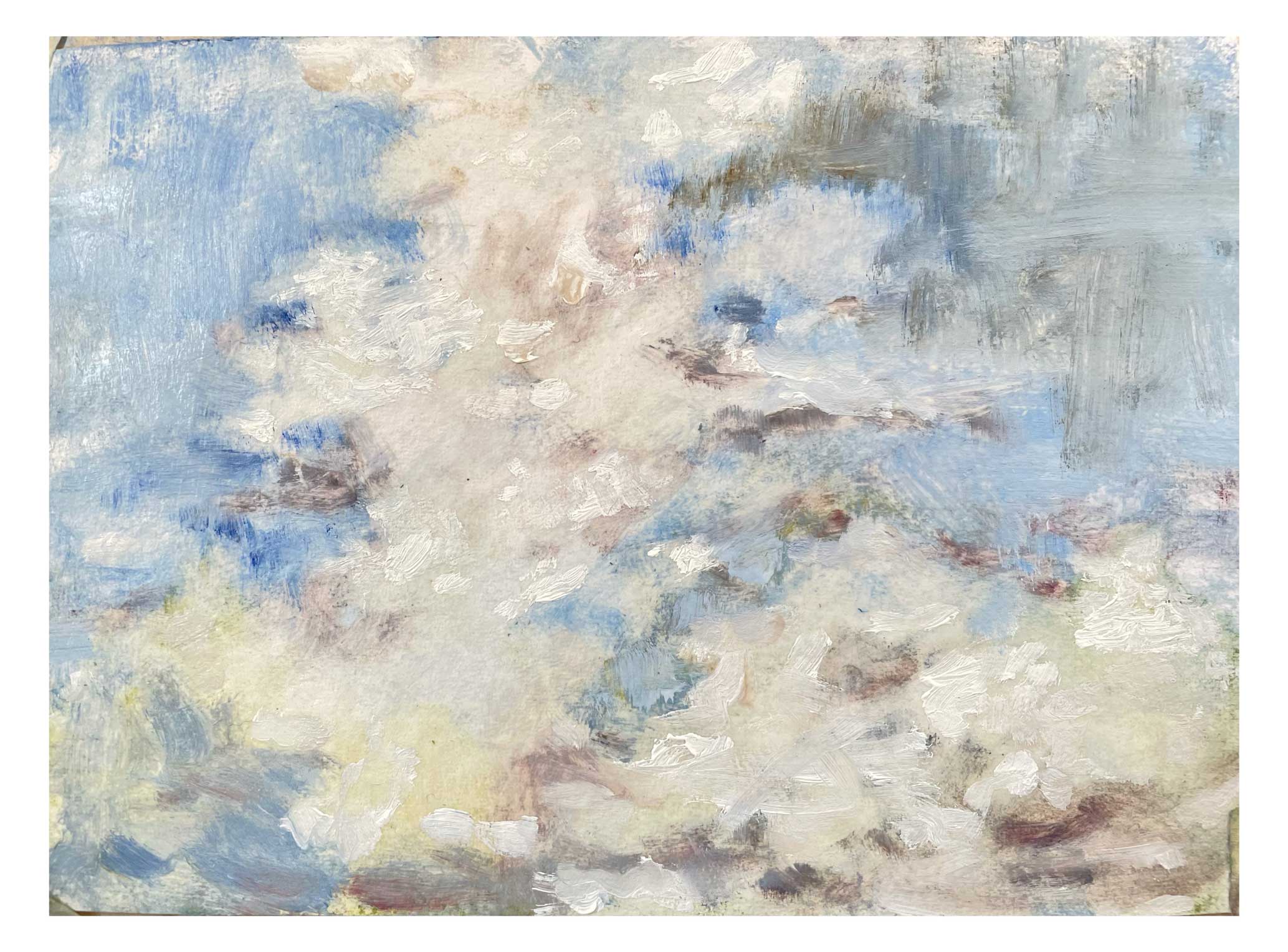 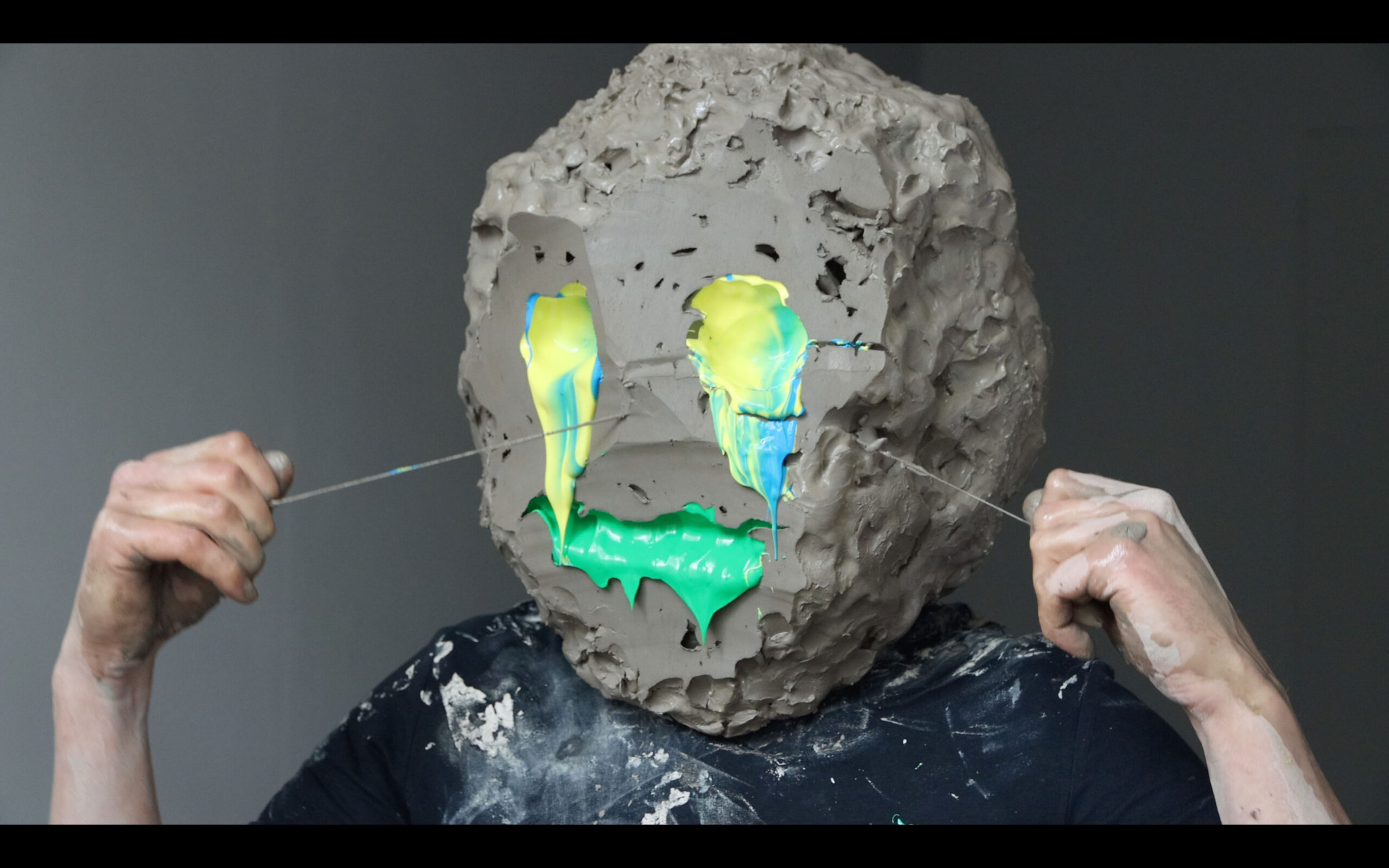