Priya’s Shakti was launched in 2014, at Mumbai Comic Con, to wide and instant appreciation, winning the Tribeca Film Institute New Media Fund the same year. In its various forms, it is an intricate interweaving of Indian mythology as well as a deep engagement with the narratives of social stigma surrounding acid attack victims. Created by Ram Devineni (producer of The Russian Woodpecker, which won the Grand Jury Prize at Sundance Film Festival in 2015) and Dan Goldman (writer of the critically acclaimed Shooting War, and the current Narrative Lead of Kinjin Story Lab), the sequel, Priya’s Mirror, was launched in 2016, and was funded by the World Bank.

The graphic narrative follows a central character, Priya, an acid attack victim in the mythological capacity of an Indian village. Raped and attacked with acid by men in her village, the goddess Parvati begins to inhabit Priya’s body in order to bring about a change in how men perceive women, and how society treats the victims of rape and gender-related violence. The sequel, Priya’s Mirror, deals with the evil demon Ahankar, and Priya’s mirror, which is her weapon. Ahankar viewing his own reflection leads to his destruction, making for an interesting societal metaphor on the hypocrisy of how ]acid attack victims, and victims of other gender-based violence are other-ized and shunned by their communities. The sequel is made in collaboration with Paromita Vohra (director of Unlimited Girls, and writer for Khamosh Pani) and Shubhra Prakash (director of Hypokrit Theatre company in New York).

Recently, beginning from the 27th of December, and ending on the 16th of February, the two volumes were curated into an interactive digital art show at Triveni Kala Sangam. Curated by Mukta Ahluwalia, and made in collaboration with Kaleidoscope Digital Art, the exhibition featured video interviews with the numerous women who inspired the comic series, including Monica Singh, founder of the Mahendra Singh Foundation, as well as Sonia and Laxmi, acid attack victims and successful businesswomen. They spoke of their struggles after the acid attack itself, when they were blamed for bringing the attack on themselves. Laxmi spoke of the struggle of her attacker leaving scot free and being married, and all three women spoke of the shame they felt related to their appearance due to the scars left by the attack. Sonia spoke of the journey of wearing a burqa, to deciding to shed it. Monica spoke of the hard year she faced at the hospital, to beginning the Mahendra Singh Foundation. 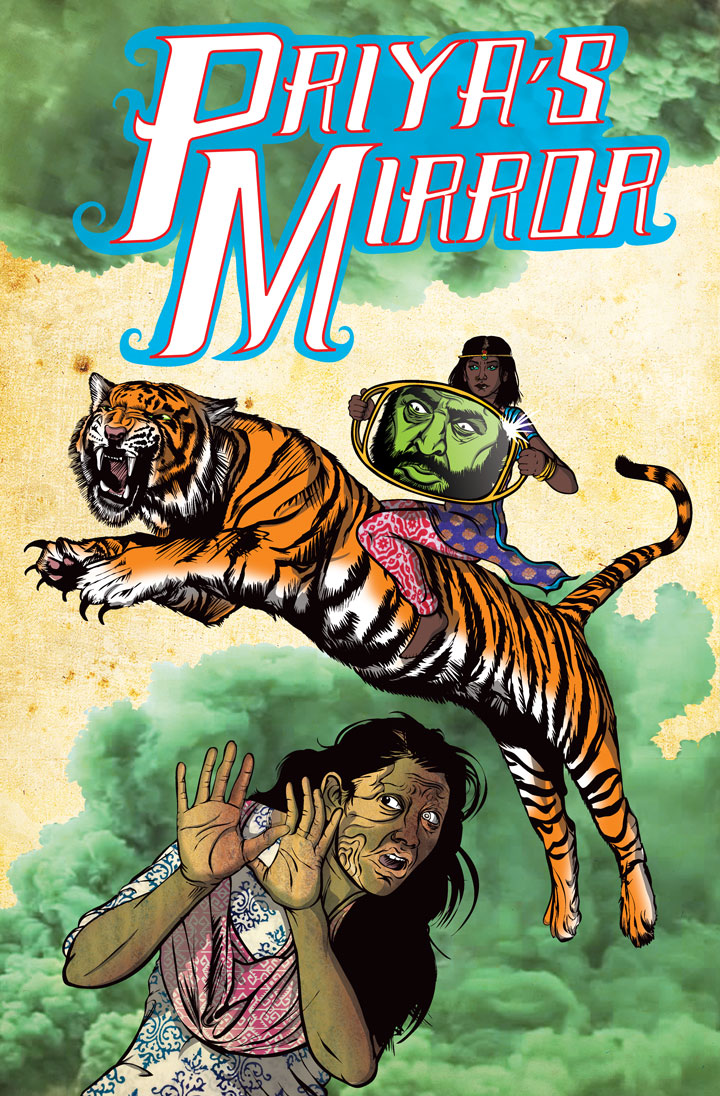 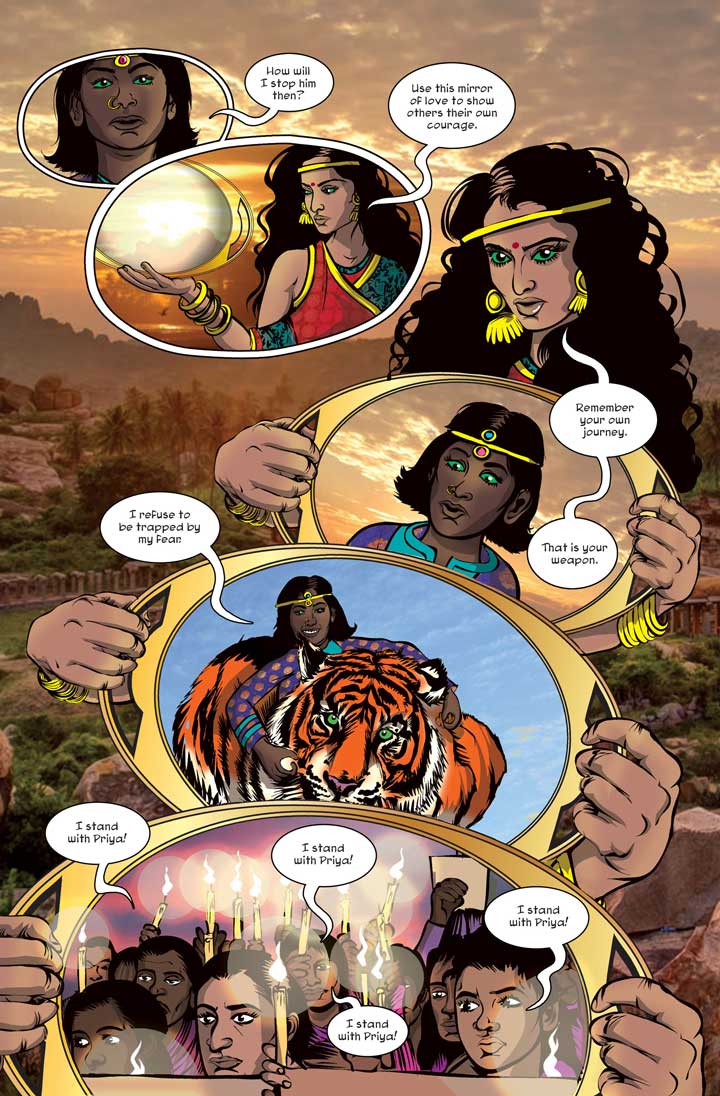 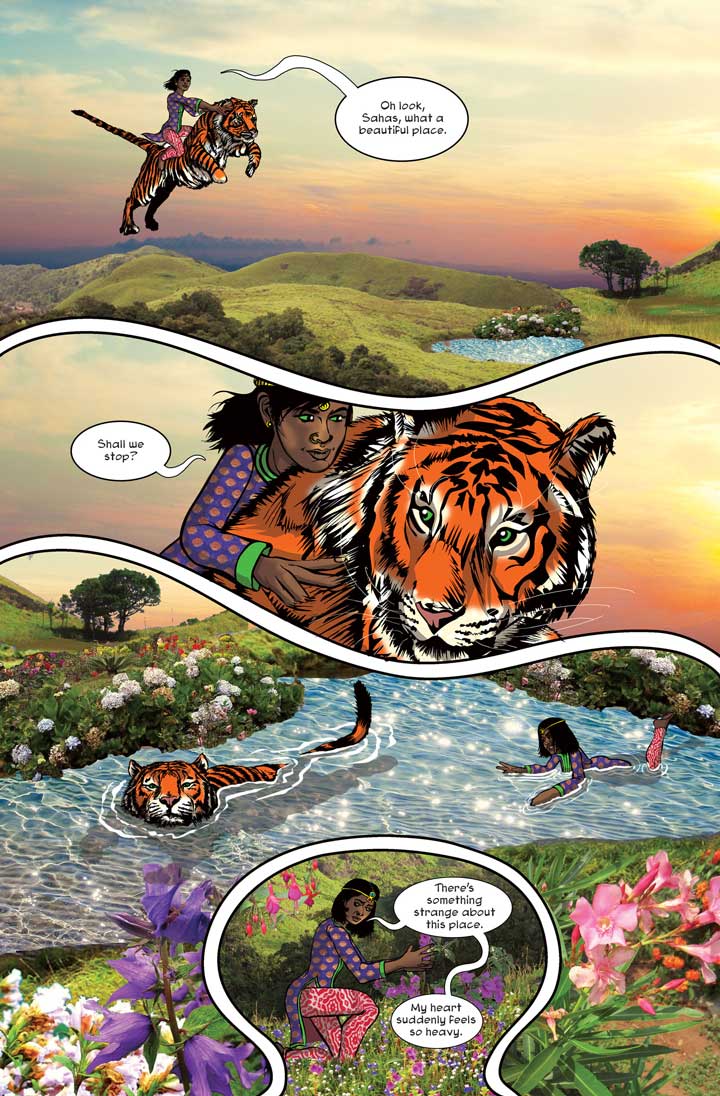 What follows next is a video panel of the two comic books, played out with the three women featured as characters. What is interesting about Priya’s Shakti and Priya’s Mirror is that rather than displacing the idea of acid attack to a vision of idealized femininity, their central character is instead imbued with a strength and associated with divinity through the goddess Parvati’s presence. What is also significant is a refusal to draw the characters without their scars- instead, their scars, the very aspect that serves as a reminder of their exclusion, is consciously included. Dan Goldman’s style in the two comic books is reminiscent of the mythological graphic depictions of Amar Chitra Katha comics, the effect is a fusion of mythology and fantasy. The choice of appropriating the style of Amar Chitra Katha becomes a fascinating experiment and a larger comment on how mythology, and mythologizing is a powerful tool for how we come to read our cultures. In addition, it draws attention to how construction of marginalized entities are constructed and excluded in socially accepted versions of a tale.

The exhibition also features a film depicting the saga of Parvati’s incarnation on earth, and Shiva’s Tandav Naach, with edited cuts of various mythological films produced in India. Here again, the experimentation and larger conceptual ethos of old cuts are shifted into newer perspectives, when old legends are re-told with the same visual media.

Along with the display, the comic is also available in video form through the Blippar app. It is available online as well (https://www.priyashakti.com/). Interestingly, he story of Priya has lead to a number of graffiti adoptions of the tale across different parts of India.The exhibition itself is an interesting experiment in interactive art, and the use of art for an explicit social engagement with gendered violence. In the intersection of using both technology and art, it creates a commendable environment for the necessity and possibility of dialogue, and the use of our shared cultural history to address the same. 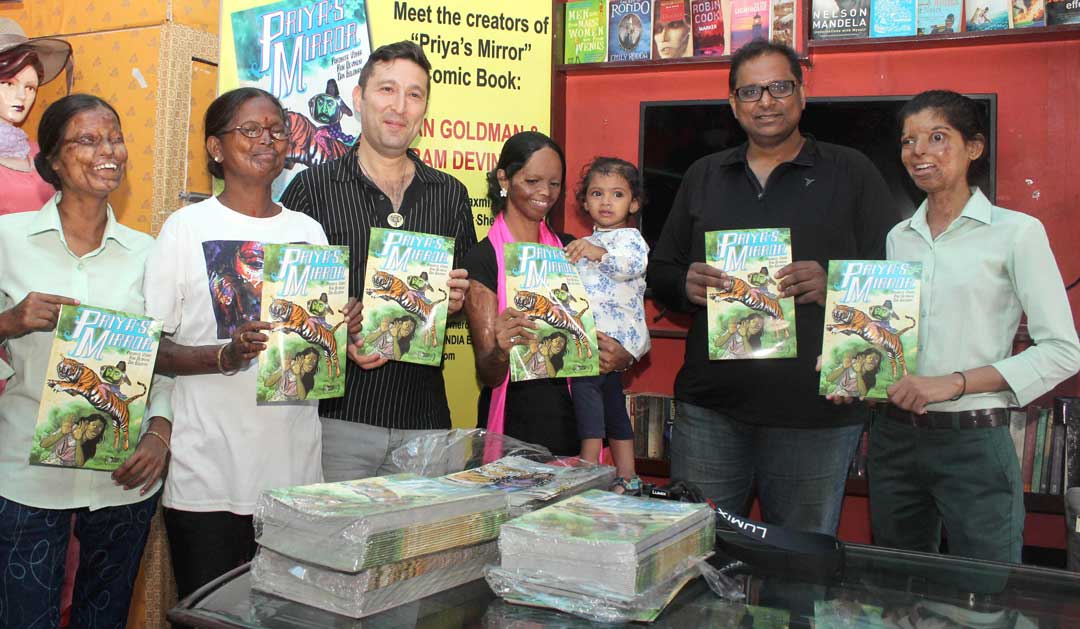 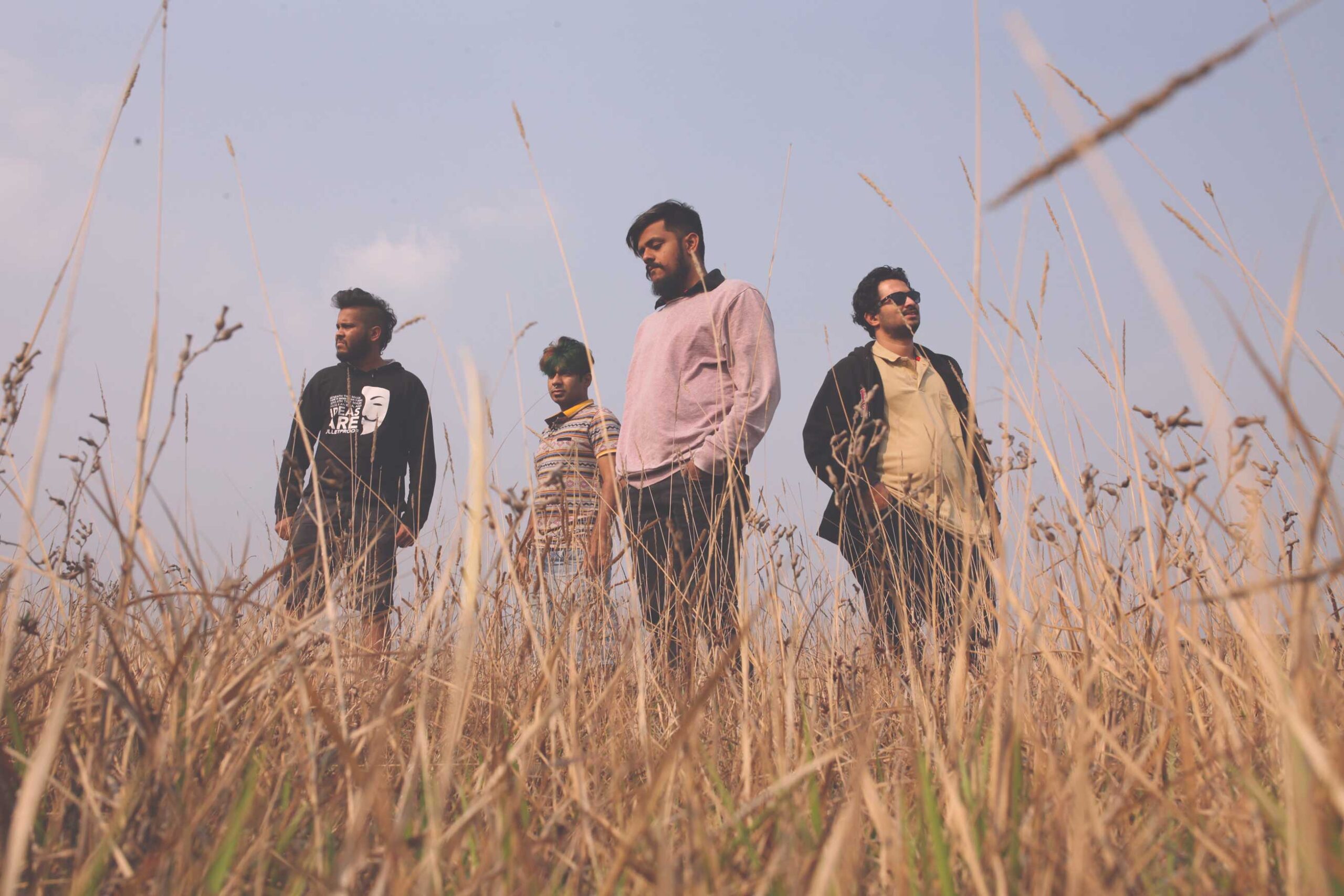 Gully Boy and the Ever- Changing Hip Hop Landscape of India

Inspired by the lives of Divine and Naezy themselves, Gully Boy is the story of Murad, the son of two working-class parents in Mumbai, who discovers his talent and passion… 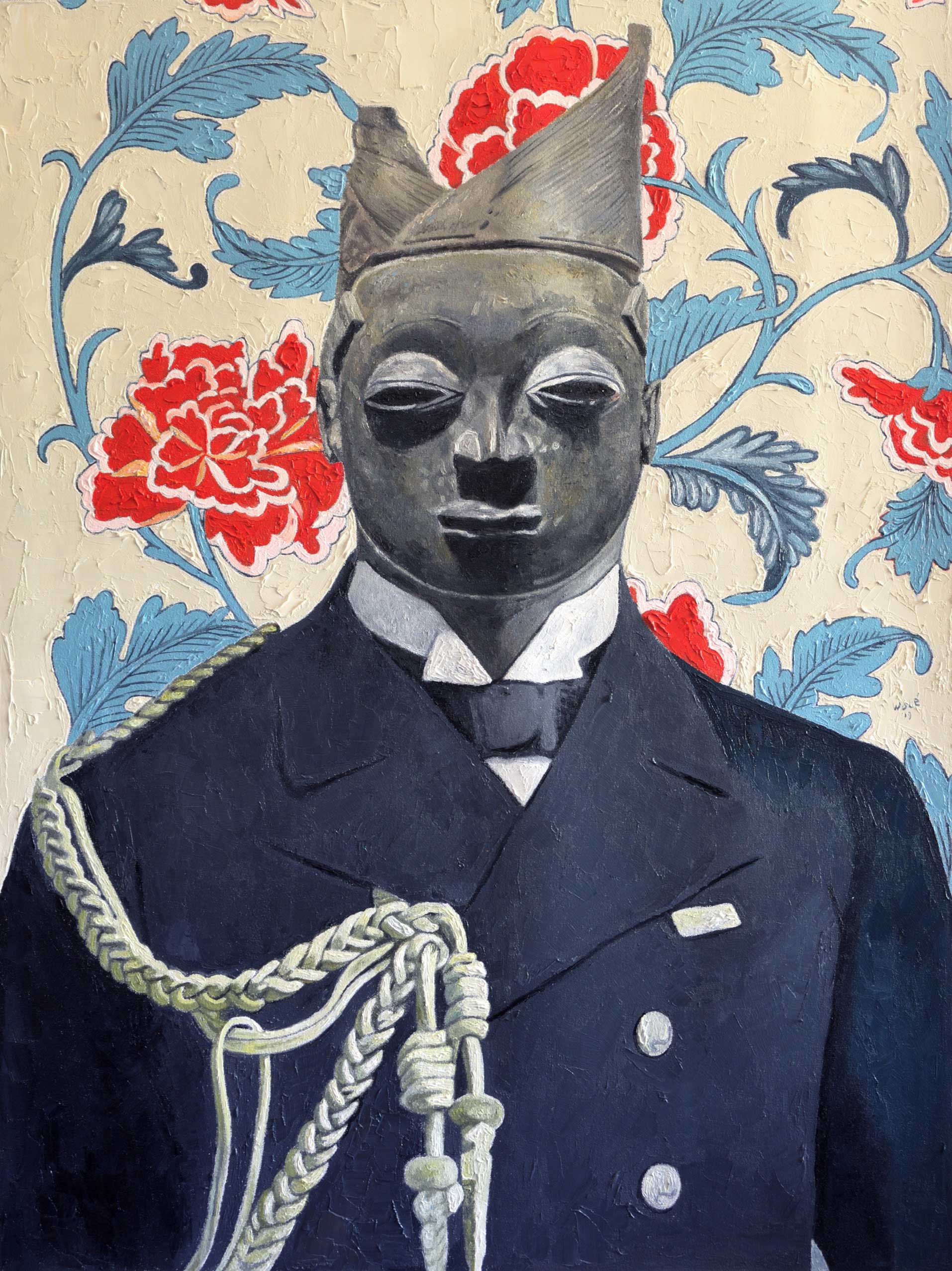 Wole Lagunju: The Empire Paints Back.