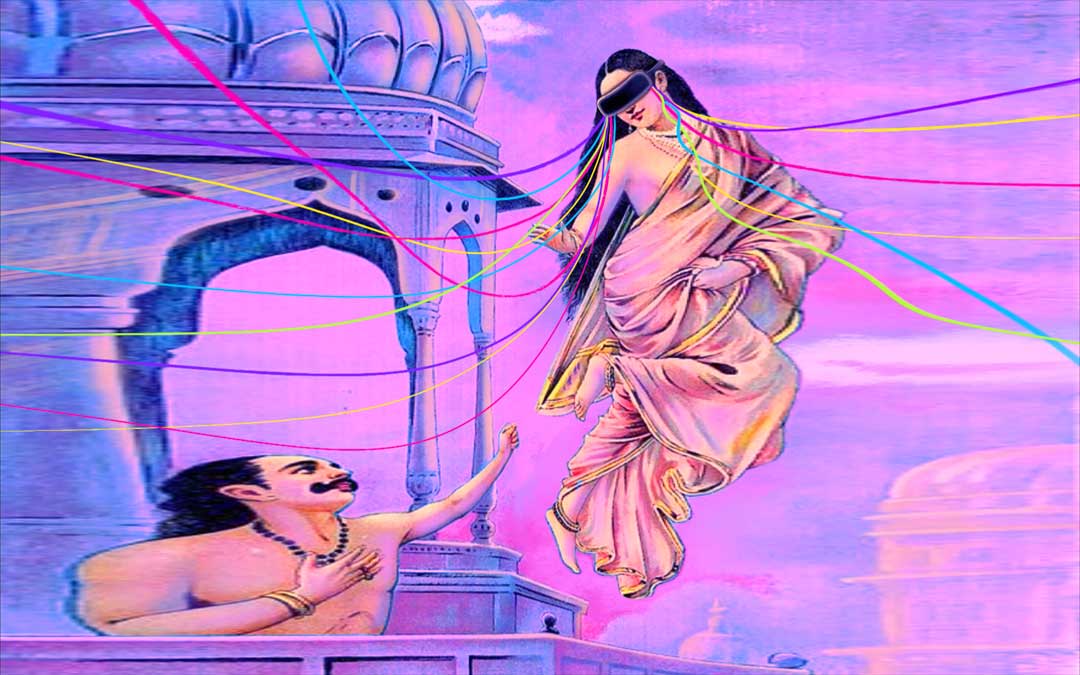 Innumerable Indian children have fallen asleep to stories from the Mahabharata every night. This epic has been taught under trees during Valmiki’s reign, retold through dusty tongues of countless generations, printed and reprinted on paper, engraved in stone and carved in the granite walls of our temples. It resides within the collective Indian consciousness.

Samyukta Madhu builds on that knowledge by bringing the epic into the 21st century. She does this by introducing characters like Nala, Bhima and Urvashi to the trend of the times: virtual reality. VR is one of the fastest-selling commodities and it’s taking the world by storm.

Madhu pulls forth the characters and makes them so tangible, so relatable.
Like Bhima who can access Hidimba only through his headset.
Madhu makes us empathize with him: his longing for someone he can’t share a physical reality with, his determination to access her in any way; if only through the cyberspace.

Or how Urvashi’s ascent into heaven after Pururava broke one of her conditions, is made easier by her escape into VR. It is hard to leave a lover; to separate, knowing it will be forever. The VR headset becomes symbolic for her wanting to escape the pain of saying goodbye.

The paintings show us a vulnerable side to these otherwise mightly-percieved God and Goddesses. Like the portrait of Nala and Dayamanti in the blue forest. It shows us the dynamism of their relationship. A duality of wanting to spend time together yet zoning out into their own worlds.

The choice of coloration itself sets the tone for the artwork. The popping pinks and the neon blues establish a vaporwave aesthetic for the background setting.
The foregrounding of the characters gives them a three-dimensional effect. As if you could step into the sunset-drenched court or thriving indigo forest and join them in their conversations.

Madhu has selected ancient paintings by the likes of Raja Ravi Varma and coupled them with settings she has created from scratch. The characters were painted by mighty artists in great realistic details- the folds of Hidimba’s sari carefully constructed, her ornaments glistening under the moonlight.

The successful juxtaposition of these two contrasting aesthetics shows us exactly how skilled Madhu is. She makes the painting whole and gripping.

The underlying comments on their vulnerability- Bhima’s longing, Urvashi’s goodbye, Nala’s shared intimacy with Damayanti- make the artworks instantly relatable to the human mind. One must commend Madhu’s choice. Out of all the instances she could choose from Mahabharata, she has a nose for sniffing out delicate day to day instances that are packing a truckload of emotional energy within them.

Every epic must eventually reinvent itself to better suit the times and Madhu has done us all a favor, by doing this for the Mahabharata. In a decade where the trend is to look into western cultures to find inspiration, Madhu reminds us that there is plenty of fodder back home.

‘The words came out of my mouth like pieces of shattered glass, uneven and useless.’ – Arshiya

Arshiya Dhiman, is a sixteen-year-old artist from Himachal Pradesh, currently living in Bangalore. She tells us how she got to making illustrations and the inspiration behind those art pieces.